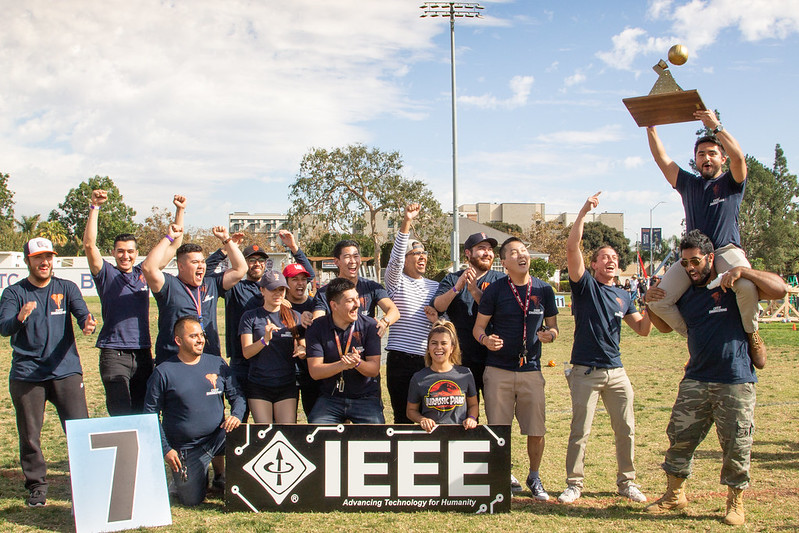 For the first time in Pumpkin Launch history, a four-way tie forced a sudden death round, with a team of Cal State Fullerton electrical, mechanical and civil engineering students squashing the competition for the first-place win.

Despite a slow start and some setbacks during the Nov. 2 competition on campus, the CSUF student chapter of the Institute of Electrical and Electronics Engineers, known as IEEE, made a comeback in the last two rounds to double their score by hitting the medieval-themed dragon target.

The four tied teams each had 40,000 points, with IEEE launching a pumpkin into the dragon target again — worth 10,000 points to triumph with 50,000 points and win the coveted perpetual Pumpkin Launch Trophy for the first time.

“Winning in sudden death gives our win a lot of meaning because we had to work hard for it and earn it,” said Eric Alcala, team captain and an electrical engineering major.

The 12th annual event, which attracted about 2,500 spectators, was hosted by Cal State Fullerton’s College of Engineering and Computer Science and Discovery Cube.

“We’re happy with the results since it is only our second year competing, and since the majority of us are computer engineering majors, it’s satisfying to know that we can still compete with the more mechanically-driven majors,” said team captain Alexander Sigler.

The seven-member team reused last year’s ballista-style catapult and made such modifications as adding a camera to increase accuracy when aiming at targets, added Sigler, who serves as vice president of the student group.

The 17-member IEEE team, which included students from the Society of Hispanic Professional Engineers, built a new giant slingshot launcher from scratch to increase accuracy of the device.

“With the slingshot design, we were able to actually aim and go for any target our hearts desired,” said Alcala, who serves as IEEE treasurer.

The team spent more than 100 hours on weekends to build the winning launching device. The day before the competition, the team faced some challenges with the device’s clamp, which wasn’t able to withstand the tension of the bands, but that didn’t discourage team members. The team stayed up late the night before making a new clamp. Then on competition day, the device’s pouch, used to fling the pumpkins, ripped and one of the slingshot bands over stretched and tore. But fast-thinking quick fixes put the team back in the competition to hit targets and rack up points.

“We were able to readjust our device just in time for a comeback — and eventually the win,” Alcala said.

CSUF Provost Pamella Oliver welcomed the crowd of children and their parents, as well as the competitors, in which a total of 11 collegiate and community teams, including six CSUF student teams, participated in the Pumpkin Launch. The annual fall ritual of flinging pumpkins into the air is aimed at exposing youth to STEM — science, technology, engineering and mathematics — college studies and careers.

“The Pumpkin Launch competition demonstrates creativity and ingenuity,” Oliver said. “There is a spirit of community and shared enjoyment of how fun science is throughout the whole day.”