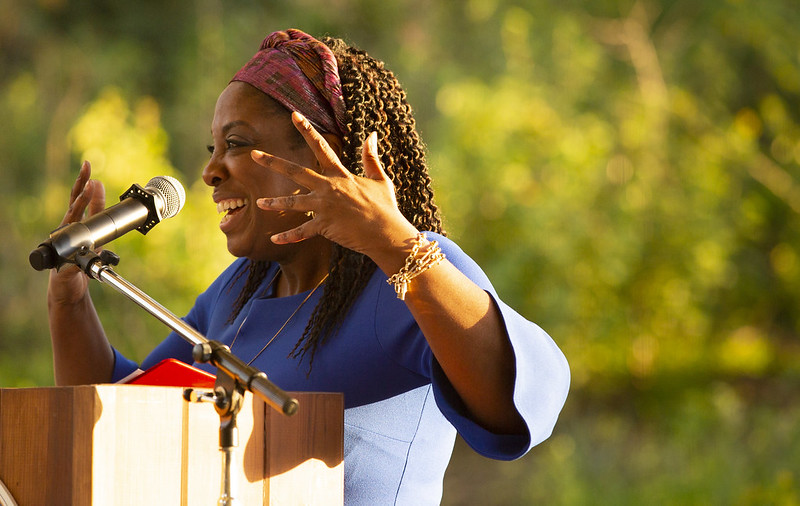 Charlesetta Medina, small business specialist and entrepreneur-in-residence at Cal State University’s Center for Entrepreneurship, knows a lot about the obstacles that women leaders face. From being unsure which direction to take, encountering failure and having a limiting mindset — she has experienced all of them.

Medina '10 (B.A. business administration-entrepreneurship) shared her journey from academic disqualification to being chosen as the keynote for the March 13 Women’s History Month President’s Reception.

Speaking on "Women’s Leadership: Agency and Authenticity," Medina emphasized the importance of stretching outside of one’s comfort zone. In 2003, as a single mother of three with only a high school degree, she lost her job and was forced to stretch, leading to her decision to return to college.

At CSUF, Medina wasn’t sure what to major in, finally settling on entrepreneurship. She struggled to carry a full course load while raising three children, working two part-time jobs and building a direct sales business.

The two required statistics courses were a breaking point for her; she tried and failed the first class twice before passing it, which wreaked havoc on her GPA and resulted in academic disqualification.

"What concerned me the most about failing was being an example for my children," Medina said. "This is where I learned that some of the best lessons come wrapped in sandpaper. Failing didn’t feel good, but it wasn’t fatal. My family became the reason for doing what seemed impossible. I found the money to enroll in open university, raised my GPA and was reinstated.

"One of the things I love most about my role in the center is that I have the opportunity to talk with students and encourage them to move through their disappointments and challenges. We’re all going to have them. It’s how you choose to respond that matters."

She also stressed the importance of saying "yes" to the right things — those that will allow stretching and growth. She is ecstatic that she said "yes" to founding the Titan Women Collective, and is excited about helping empower and mentor Mihaylo’s female entrepreneurs.

“This is where I learned that some of the best lessons come wrapped in sandpaper."

Medina ended with a challenge to the audience:

"I want to encourage you to get excited about saying "yes" to things that you haven’t even tried. Things that you may not have even thought you could do. What I know for sure is that when you make the decision and you leap, you have the capacity to figure it out."

The reception was hosted by President Fram Virjee and his wife, Julie, in partnership with the WoMen’s and Adult Reentry Center.

In his welcome remarks, Virjee touted the Titan legacy of progress for women, and how he believes that CSUF’s record of female leadership is part of the history-making changes occurring across the nation.

He noted that CSUF ranks first in the CSU for the number of women graduates; all current ASI officers are women; and women hold half of the seats on the university’s executive team and two-thirds of the deanships.

Referencing the nonprofit that he and his wife have in Rwanda, Virjee also noted that he has seen firsthand the transformative effect that female leadership can have. With the tragic genocide situation in that country, women were forced to step into leadership positions, and they have demonstrated the tenacity, skills and abilities to move their nation forward.

"That’s what this month is all about and that’s what Cal State Fullerton is all about. Celebrating, studying and building upon women’s history and leadership and agency and authenticity," concluded Virjee.

The evening wrapped up with Rosalina Camacho, coordinator of women and gender initiatives for the WoMen’s Center, announcing the annual HER(d) awards in recognition of campus women and allies who have shown exemplary leadership in their work, while demonstrating confidence, patience, compassion and wisdom.