Convocation 2017: Honoring the Past, Celebrating the Present and Looking Forward 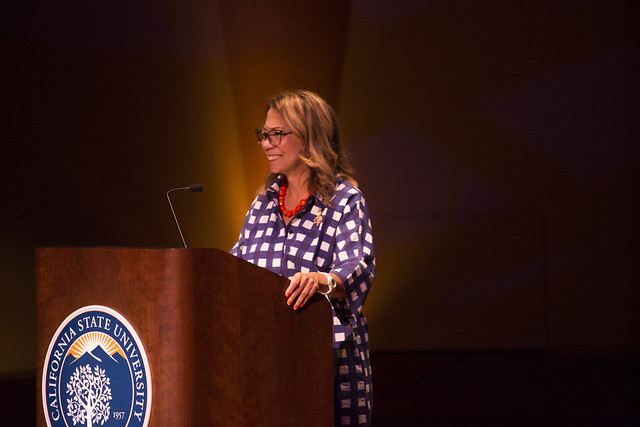 This year, included among the annual gathering of new and veteran faculty, staff and administrators at President Mildred García’s sixth CSUF Convocation address, were dozens of “Founding Titans” — alumni, faculty and staff who joined the Titan family between 1957-69.

“You are the gold standard, and we are proud to officially begin our yearlong Diamond Anniversary celebration by welcoming you back to campus!” said García.

After acknowledging the contributions of founding faculty members, she noted that the University’s first graduating class consisted of five graduates — three women and two men.

“Notice how, even back then, we were trailblazers. More than half of our first graduating class were women — all three of them!”

She also took the opportunity to welcome 43 new faculty members to the University.

García then focused on how the University is doing as it enters the final year of a five-year strategic plan, and how the campus is preparing for the next five-year plan that will be unveiled at next year’s convocation.

Goal One: Develop a curricular and co-curricular environment that prepares students for participation in a global society and is responsive to workforce needs.

Three years ago, the president promised that using the first goal, the University would develop CSUF’s first academic master plan. Today, this collaborative undertaking has been completed. “This plan will guide what we teach, who we teach, how we teach, who will do the teaching and how many will be taught. It will also be instrumental in the development of the new five-year strategic plan and the University’s self-study and institutional report for the WASC Senior College and University Commission reaccreditation visit in fall 2019,” García said.

The president also noted the following:

Goal Two will be driven by the California State University-mandated Graduation Initiative 2025 or GI 2025. García pointed out that CSUF met or exceeded many of the goals put forth in the 2009 incarnation of GI 2025, with amendments to the initiative for all 23 campuses. “In the parlance of academia, we were the ones in front of the class who threw off the curve,” she said.

Campuses are now being asked to push to increase four-year graduation rates. However, this new challenge tracks with the University’s aspiration to reach higher.

Goal 3: Recruit and retain a high-quality and diverse faculty and staff

The Division of Human Resources, Diversity and Inclusion processed more than 3,000 applications that resulted in the 2017-18 tenure-track faculty class and hired 138 new staff members from a pool of 30,000 applicants.

With budget allocations from the state decreasing, philanthropic support becomes even more critical. García said and pointed with pride to increases in grants and contracts, as well as fundraising.

This year, the Division of University Advancement saw a 20 percent increase in the number of gifts in the $10,000-$25,000 range. During the final fiscal year prior to the implementation of the strategic plan, CSUF received $8.5 million in total gift commitments. Since then, such efforts have increased gift commitments year by year; for the past two consecutive years, the University has received more than $20 million in gifts.

Additionally, the market value of the University’s endowment since 2012 nearly doubled from $34.3 million to more than $61 million today.

García also pointed out the role Athletics plays in building a philanthropic culture. Having winning teams helps. This past year, seven teams participated in the Big West Conference for the first time in the University’s history — baseball, softball, men’s basketball, women’s tennis, both men and women’s soccer, and men’s track and field, who, incidentally, won the Big West Championship for the first time. And who can forget that the Titan baseball team made it, for the 18th time, to the College World Series.

Four-year graduation rates in 2012 for first-time freshmen were 14 percent. Four years into the strategic plan, that number has increased to approximately 23 percent.

And then suddenly, music filled the air and, one-by-one, faculty and staff members began to step out of their rows and started singing the opening number of the musical, “Hamilton,” only the lyrics had been modified:

“We Are Cal State Fullerton”

#1
How does a humble state school built on big dreams for a college,
Dropped in the middle of the perfect
Spot in Orange County by a freeway with a goal for education
In 60 years be first tier in the nation

#2
The forty thousand students within our foster
Get a lot farther cuz WE work a lot harder
And we are a lot smarter
And sometimes we feel like a martyr
But today, we celebrate with our peers and partners

#3
When I walk ‘cross the campus I think “ This place is insane, man!”
How do students navigate with phones up to their face, man?!
But all around you is diversity acclaimed!
And the world’s gonna know our name! What our name, man?

#5
When I leave for my commute, on my route down State College
To Nutwood Avenue when will all of this construction be
Through? This traffic makes me sick . I’m done with it.

ALL
The parking structure’s big but the spaces go quick

#6
Oh God I have so much left to do
My syllabus is fine
But shouldn’t I add more guest lectures
To my class outline
Gotta schedule office hours, give my welcome speech a tweak
Cuz the students will arrive in one more week

SOME FACULTY:
We will teach to them

ADMINISTRATORS:
Me? I’ll plan for them

ANYONE WHO HIRES INTERNS/WORK STUDY:
Me? I’ll hire them

EVERYONE ELSE
Me? I’ll help them

PRES. GARCIA:
And me? I’m the President who’ll lead ‘em.

ALL:
There’s a million things we haven’t done. But just you wait!

PRES. GARCIA:
Who are we, friends?!

ALL
We are Cal State Fullerton!