An Intellectual and Cultural Center 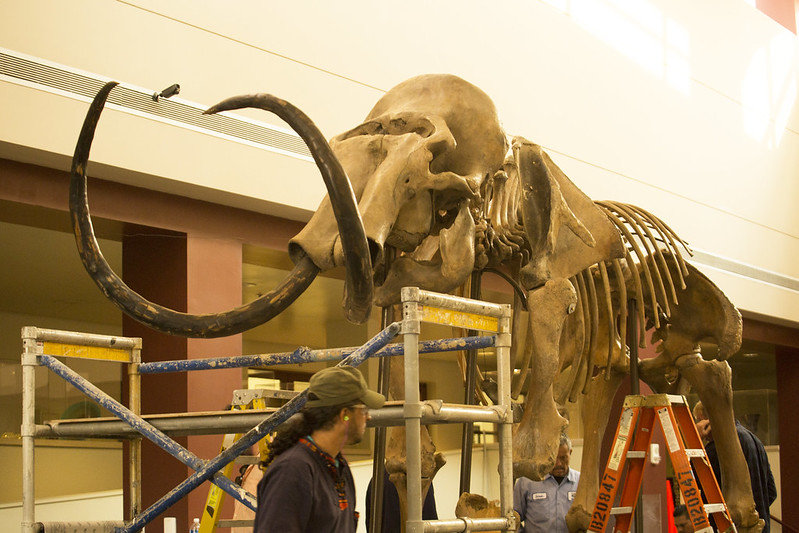 Orange County was once home to many fossil elephants, such as Columbian mammoths and mastodons, said James F. Parham, associate professor of geological sciences and faculty curator of paleontology at the John D. Cooper Archaeological and Paleontological Center. Parham stands next to one of the more intact Columbian mammoth skulls found in the county, estimated to be about 25,000 years old. The skull was found two years ago during construction of a new community in Irvine, near the San Diego Freeway and Jamboree Road. The mammoth has one full and one partial tusk. Parham and his students are starting work on a project to summarize fossil elephants from the county.

Update: The newest Titan to join the CSUF family has arrived at Titan Student Union. Workers have completed the installation of the woolly mammoth fossil, now on display for public view.

Tuffy's ice-age ancestor, a rare Siberian woolly mammoth fossil, is coming to Cal State Fullerton this fall in a permanent display in the Titan Student Union.

Most of the world's woolly mammoth population vanished about 10,000 years ago, with Asian elephants the closest living relative of the extinct beast. The prehistoric woolly mammoth fossil is a perfect fit for CSUF because of the University's modern-day pachyderm mascot named Tuffy Titan, Gregg noted.

Gregg, a geotechnical engineer and president of Gregg Drilling & Testing Inc. based in Signal Hill, has kept the fossil in crates and looks forward to seeing the mammoth on public display.

"I'm happy that the mammoth is going to get out of the dusty storage shed so people can enjoy viewing it," he said.

The fossil, which is almost fully intact, is estimated to be about 20,000 years old and was found about 15 years ago in a remote area of western Siberia, Russia, near the Ob River, said Gregg, who acquired the mammoth from a friend and fossil collector.

The mammoth skeleton, which is 11 feet tall at the shoulders and 24 feet in length from tusks to tail, will be in a museum-type display in the Titan Student Union's Chapman Atrium, a high-traffic area outside the Portola Pavilion.

CSUF's Division of University Advancement, the College of Natural Sciences and Mathematics, John D. Cooper Archaeological and Paleontological Center and Associated Students Inc. partnered with Gregg to make the donation possible and build the exhibit.

"This is a priceless fossil that will help educate and inspire thousands of students and guests as they walk through the Titan Student Union," said Michael Karg, senior director of development. "It’s hard to put a value on it, but similar mammoth fossils have been sold at auction for between $200,000 and $400,000."

ASI orchestrated the design and construction of the exhibit site, removing planters and building the platform space to meet seismic and other standards. The design includes a glass wall, security cameras and alarm system to keep the woolly mammoth at arm's length from visitors, said Carol McDoniel, ASI director of administration.

James F. Parham, associate professor of geological sciences and Cooper Center faculty curator of paleontology, is excited about having such a rare fossil display on campus.

"It's hard not to look at this spectacular fossil of an extinct elephant and not reflect on its extinction and how long ago it lived on Earth," said Parham. "The story of elephants from the prehistoric past and into the future is intertwined with that of humans."

Mammoths and mastodons went extinct during the last ice age, along with saber-toothed cats, dire wolves and many other large mammals, Parham noted.

"The woolly mammoth's extinction has been attributed to human hunting and climate change," Parham continued.

While the shaggy-coated mammoths did not roam in what is now Orange County, Columbian mammoths and mastodons lived in the region, including near campus in Fullerton, Parham explained. He and his students are currently studying these local fossil relatives at the Cooper Center, a partnership between CSUF and OC Parks.

"For me, the most exciting thing about this fossil donation is that it will allow the community to see a spectacular woolly mammoth — real tangible evidence of ancient, extinct life. But also it is the starting point for another conversation about the fossil elephants of Orange County."

Future plans include adding exhibit space next to the woolly mammoth to showcase Cooper Center fossils and artifacts, and faculty-student research.