“You just learned two things,” said Virjee at the Sept. 6 University Convocation. “First of all, I know how to make a fool of myself. And, we all know that performance was killer because of Rachel.”

He pointed to Herzog as one example of thousands of Titans who personify the saying, “Titans Reach Higher.” During her time at CSUF, the 2018 Outstanding Senior was a member of such organizations as the President’s Scholar Student Association, Entrepreneur Society, Sales Leadership Team and Cal State DC Scholars program.

“Take a look around and you will find Titans reaching higher everywhere, every day. It’s inspiring, and it’s inspired by every new class,” said Virjee.

“We see each of you for your promise,” he said to new students in the audience. “We aim to enhance your strengths. Your intelligence is not fixed — it’s a muscle that we can help you grow beyond your wildest expectations.” 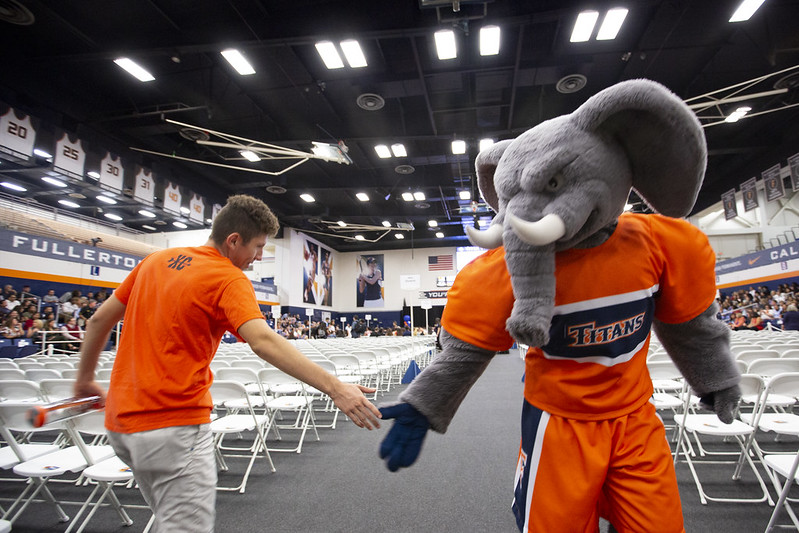 Virjee then cited a few more examples of “Titans reaching higher,” including:

Virjee also recognized founding members of the Titan family — students, faculty and staff from 1957-69 — who gathered earlier in the day for a brunch at the Golleher Alumni House and were invited to stay for Convocation.

“We have another saying on campus, besides ‘Titans Reach Higher,’ and that is ‘Once a Titan, Always a Titan,'” said Virjee. “That saying is brought to life by some of our most distinguished guests here today, our Founding Titans.”

Borjas recalled his own experience as a first-generation college student, unsure of how he fit into the Titan community. Following an orientation leader’s advice to “give it a shot,” Borjas joined the ASI Street Team, became an orientation leader and tour guide, founded a fraternity on campus, served as a student senator for the College of Communications and a resident adviser before becoming ASI president.

“Join one of the 300 student organizations you saw out there at Discoverfest, and if there’s not one out there for you, start your own,” said Virjee.

“Use your voice to articulate what you want to see on our campus and around the world, run for student government, join a fraternity or a sorority, go to an athletic event, wear Titan gear, vote, study abroad, immerse yourself in undergraduate research programs, go see our performing arts, be part of our Diversity Initiatives and Resource Centers, become a mentor, become a tutor, become a campus leader.

“Be present, be active and above all else, be Titans.”

The livestream video of Convocation is available on the Titan Communications website.