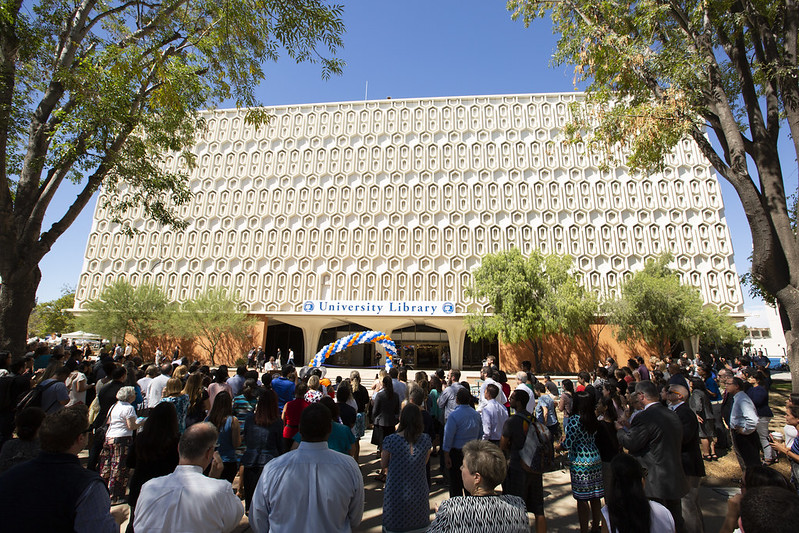 This is not the same library that was built in the 1960s.

There's a whole new look and feel in Cal State Fullerton’s Pollak Library and students, faculty and staff joined administrative leaders in spreading the word during the Aug. 29 grand reopening of the veritable center of the campus community.

Welcoming those in attendance were President Fram Virjee and Interim Dean of the Library Emily Bonney.

"In many ways, it is the genesis of innovation, a backdrop for co-curricular activities," he added. "It is who we are and what we do.

"It's also the tallest building on campus," he proclaimed. "A lot of people don't know that. You know why it’s the tallest? It's got the most stories.

"OK, that's a corny grandpa joke, but there is some truth to the punch line," Virjee admitted to laughter. He noted that when the library opened in 1966, it housed 100,000 books and volumes. “Today, our library is home to more than one million books and has nearly two million visitors annually.

"It is also my favorite building," he said. "And this, is only the beginning."

Bonney agreed. "It is safe to say, this is really a new library and we're just as happy as can be."

She went on to thank Virjee for his support, as well as others throughout campus. "My task is to thank those who contributed so that you can see how deep this university's commitment to the library is. It truly does take a village."

Campus and community members filed through the sliding glass doors to tour the honors and cultural centers located on the south side of the building, then flowed into the colorful open spaces to the Writing and University Learning centers and Supplemental Instruction space at the north end.

On the second floor is the recently opened Innovation/Makerspace Center, a facility created by Information Technology and dedicated to student's creativity, innovation and talent through advanced technology. Here, students can get together and test out ideas in virtual and augmented reality, print out designs in 3-D, collaborate by using a digital whiteboard or design on enhanced tablets. The renovated spaces continued onto the third and fourth floors of the north part of the library.

Much of the original building remains closed due to damage caused by a 2014 5.1 magnitude earthquake that forced the closure of the upper floors on the south part of the building. Originally built in the 1960s and expanded in 1996, the Pollak Library is the largest facility at Cal State Fullerton with 360,000-square feet of space.