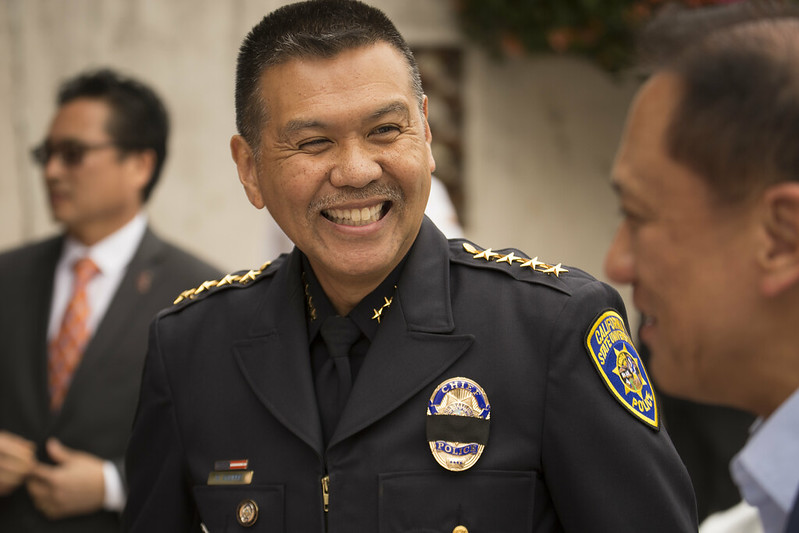 Campus and community members, including Fullerton Mayor Doug Chaffee, and several representatives of police departments from throughout the Southland, were on hand for the official swearing-in ceremony for Cal State Fullerton’s University Police Chief Raymund Aguirre.

"This is a good, stellar afternoon for a stellar new chief,” said retired Police Chief Dennis DeMaio, who praised Aguirre. “I know that he’s up for this challenge … he is the right person for the right job.”

“This is a very important day for Cal State Fullerton and the University Police Department,” said Danny Kim, vice president for administration and finance and chief financial officer for the university, who shared greetings and best wishes from CSUF President Fram Virjee, who was out of town attending the Titan men’s basketball team’s first-round game in the NCAA championship tournament.

Kim gave the oath of office, and Aguirre’s son Matthew pinned the University Police badge on his father.

Aguirre gave his personal thanks to Virjee, Kim, the president’s cabinet, the university community, and his past and current colleagues for their support. The University Police Department, he stressed “will continue to do the hard work that they are accustomed to doing. We will need to stay prepared to respond to critical situations and … have the courage to look at ourselves and make changes” if needed, he said, concluding that most importantly, University Police must remember the impact the department has on the community it serves.