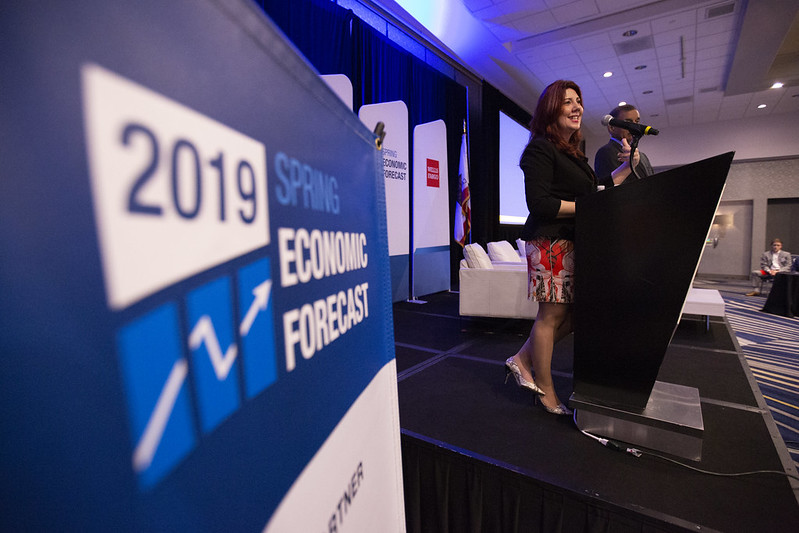 Click for a quick video overview of the forcast for:

The Probability of Recession

The U.S. economy has been shaken up in the last few months, but Cal State Fullerton economists Anil Puri and Mira Farka believe it has bounced back and will continue to grow over the next two years, albeit at a more moderate pace.

Puri, director of the Woods Center for Economic Analysis and Forecasting, and Farka, co-director of the center and associate professor of economics, discussed the economic outlook for the U.S. and Orange County at the April 25 spring economic forecast, "Shaken and Stirred: A Mature Expansion Among Rising Risks."

"The expansion continues," said Puri. "This is the second-longest recovery in the history of the United States economy. People are talking that it's such a long recovery that recession is just around the corner, but the most important point we want to discuss is why a recession is not imminent."

The mood at the beginning of 2019 was dour, due to a 19.8% drop in the S&P 500, a slowing global economy, a government shutdown and an interest rate hike by the Federal Reserve. Since then, however, the outlook has become more positive. "The major change was the change in the action of the Fed — putting the brakes on rate hikes," Puri explained.

Farka added, "We are in the beginning of the late stage business cycle. When we take a look at leading indicators, most of them are actually fine."

Recessions are typically induced by inflationary pressure or financial imbalances, and neither appear to threaten the U.S. at this time. Farka remarked, "Households have de-leveraged very quickly; the same is true for the banking sector." Subprime auto loans and corporate debt are less of a worry than in the past.

While Puri and Farka don't foresee a recession, they are forecasting slower growth. "Late-stage expansions are going to be a little slower — this is not a bad thing," said Farka. "It’s a 'Goldilocks' economy where it's not too hot — prompting the Fed to act, and it's not too cold — where we're skidding into a recession."

Quoting the popular "Game of Thrones" television show, she remarked, "'If you accept your flaws, no one can hold them against you.' Once you accept that late stage expansions grow a bit more slowly, you can then avoid worrying every few months that a recession is imminent."

A slow-growing economy is more fragile, however, and Puri and Farka see three key risks to the outlook — monetary and fiscal policy, and trade talks with China. The biggest concern is monetary policy. While the Fed has promised to hold interest rates steady, a cut might be necessary, and it's unclear if they will be willing to do so, and at the right time.

The outlook for Orange County is similar to that of the U.S. — continued growth, but at a slower pace. There is still room to grow the labor force, and few local business leaders expect a recession in 2019.

Home sales in Orange County have suffered from lack of supply and low affordability; Puri and Farka see median home price increases in the 1.5-2.5% range in 2019 and 2020.

Following the forecast, Robert Osbrink, director of the CSUF Center for Real Estate, led a short panel discussion with Barry Grossman of Wells Fargo Private Bank and Greg May of Newmark Knight Frank about commercial real estate in Orange County.

The spring economic outlook and forecast is available on the Woods Center for Economic Analysis and Forecasting website.

Mihaylo College of Business and Economics