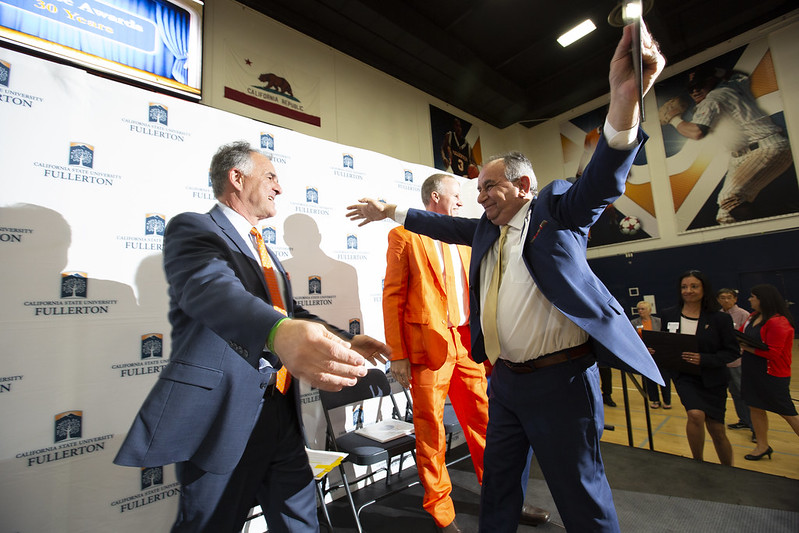 Hundreds of campus faculty, staff and administrators joined in celebration today to honor and recognize the many milestones and achievements accomplished by Titans.

And then, there was that special moment when Tuffy stormed the stage, only to reveal … he was President Virjee.

In addition to recognizing employees’ years of service and achievement of advanced degrees, the awards program presented three campuswide awards.

The Diversity, Inclusion and Equity Award recognizes staff, faculty and administrators who enhance the university environment by improving cross-cultural understanding through respect for differing backgrounds and points of view. This year’s recipient was Sharrica Miller, assistant professor of nursing, whose leadership helped establish the first annual Diversity and Inclusion Symposium within the School of Nursing. The symposium introduced important topics surrounding diversity to the campus, such as ethnicity, religion, sexuality and gender expression, providing an opportunity for the campus to recruit and retain a more diverse student population. In addition, Miller’s collaboration with the Guardian Scholars program and advocacy with foster youth is a testament to her commitment to diversity, inclusion and equity efforts.

The Teamwork and Collaboration Award recognizes staff, faculty, administrators or teams who demonstrate cooperation, collaboration and open communication. This year’s winners were members of the Tuffy’s Basic Needs team: Carmen Curiel, associate dean of students; Marlene Romero, care services coordinator; and student assistant Nick Jakel. This team was instrumental to the success of the Tuffy’s Basic Needs Center in its first year of operation, providing more than 2,000 visitors with food assistance, temporary emergency housing, financial support and the distribution of clothing and hygiene products. Since its inception, this team has developed partnerships both on and off campus that contributed to the center’s triumph and benefits students who are experiencing hardship.

The 2019 Leadership Award recognizes a staff, faculty member or administrator who demonstrates exceptional leadership qualities, as well as motivates and inspires others to a high level of commitment by creating a compelling vision. Eileen Walsh, chair and associate professor of sociology, was this year’s Leadership Award winner. Walsh was nominated not only for serving as an extraordinary role model to staff and colleagues, but for her leadership in guiding faculty and staff members to contribute to the further growth of the college and its students. She is described as a supportive mentor and collaborative leader with a clear vision for the department that aligns decisions with the students’ best interests.

This year, after an absence of several years, the Titan Excellence Awards were re-established. Sixty-four nominations were received and four outstanding Titans were named for 2019.

Matt Englar-Carlson, professor of counseling. is described as an extraordinary educator, providing students with support for both educational and personal growth. His contributions to the campus are evident through his leadership every day in the classroom and in the Graduate Mentoring program, where he increases cultural awareness among students, staff, and faculty while providing resources to the population of underrepresented students through advising and mentorship.

Jim Donovan, director of athletics, has been described as a transformative force within Titan Athletics. Since his arrival on campus, Titan Athletics has nearly quadrupled its annual fundraising and increased annual student attendance at athletic events by more than 1,200 percent. The university’s graduation success rate for student-athletes increased from 68 to 77 percent. Donovan was recently named one of only four nationwide Under Armour Athletic Directors of the Year Award winners.

Ken Moyer, information technology consultant, is described as an exceptional asset to the Department of Online Education and Training in Academic Affairs. His commitment to his day-to-day work, collaboration with cohorts, vision for the department’s projects and programs, and consistent level of outstanding customer service were noted. Additionally, his commitment to the university’s Accessible Technology Initiative and advancing awareness of the importance of inclusive teaching strategies and accessible instructional materials supports student success and inclusivity.

Titan of the Year: Jim Donovan

From the four Titan Excellence recipients, one was named Titan of the Year. This year, the honor went to Donovan, who promptly thanked the President Virjee, Vice President for Student Affairs Berenecea J. Eanes, the president’s cabinet and administration, faculty, staff and students.

“All of us in athletics are so proud to represent the university,” he said. “Thank you to our supporters, our donors and our alumni. We will have our ups and downs … but our best days are ahead of us.”

Several staff members who earned advanced degrees were recognized, including: