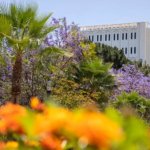 Marine Biologists Dive in to Learn More About Sharks of the Deep Seas
Aug. 10, 2020
Share This:

In cold deep waters of the Arctic lives the mysterious and vulnerable Greenland shark, the oldest vertebrate in the world. These sharks, which scientists discovered can live upwards of 400 years old, have a long history of fishing exploitation in the Arctic.

The Greenland shark’s preference for extreme deep water is particularly challenging for studying. But for Cal State Fullerton marine biologist Ryan Walter and  biology graduate student Meaghan Swintek, the researchers are using genetics to study the population patterns of the Greenland shark, one the largest shark species.

As the Discovery Channel hosts its traditional summer Shark Week (Aug. 9-16) about innovative shark research and insights on shark species, CSUF marine scientists and their students are working on research projects to learn more about these misunderstood predators of the seas. Their research is continuing, in spite of the pandemic. See related stories: Shark teeth research and whale shark research.

With shark populations around the globe declining, Walter, assistant professor of biological science, and Swintek hope their study contributes to improving not only a better understanding of the Greenland shark, but also aids in their conservation. These long-lived marine predators have endured various harvesting pressures, yet their conservation is hindered by little knowledge of their populations.

A Greenland shark in the Arctic. (Video by Hussey Lab/ University of Windsor)

“These methods have not been previously applied to Greenland sharks, so the tools that we have developed will be beneficial for monitoring present and future populations,” said Swintek, who presented her Greenland shark genetics research virtually at last week’s (Aug. 3-6) annual meeting of the  Ecological Society of America.

Their study, with collaborators Nigel Hussey and Aaron Fisk of the University of Windsor in Canada, shows that there are two populations of Greenland sharks that currently exist. One is located within the Canadian Arctic, near the Baffin Basin, a region that is popular for halibut and shrimp fisheries. Another spans a greater geographic range, from the North Atlantic Ocean around Nova Scotia, all the way to the frigid Arctic waters around Svalbard, near Norway.

The implications of this type of research extend beyond the Greenland shark, the researchers said.

“Our data suggest that the oceanographic and environmental barriers that influence the movement in Greenland sharks are likely applicable to other mobile Arctic species,” Walter pointed out. “We are also identifying how human actions may have lasting impacts beyond the fishing grounds, as the genetic data provides the potential to track the long-term legacy of such impacts.”

Swintek, who earned a bachelor’s degree in biological science-molecular biology and biotechnology in 2018 from CSUF, plans to teach science at the community college level. A recipient of a 2019-20 Graduate Student Research Program Award from the CSU Council on Ocean Affairs, Science and Technology (COAST) for her shark project, she is captivated by the Greenland shark.

“These quiet giants spend hundreds of years below the ocean, slowly roaming the depths in near- to below-freezing waters, rarely seen by the human eye,” she said. “The long-lived Greenland shark is pretty uncommon and speaks volumes to the potential damage that we have caused on their species from previous exploitation and current accidental bycatch from other fisheries.”