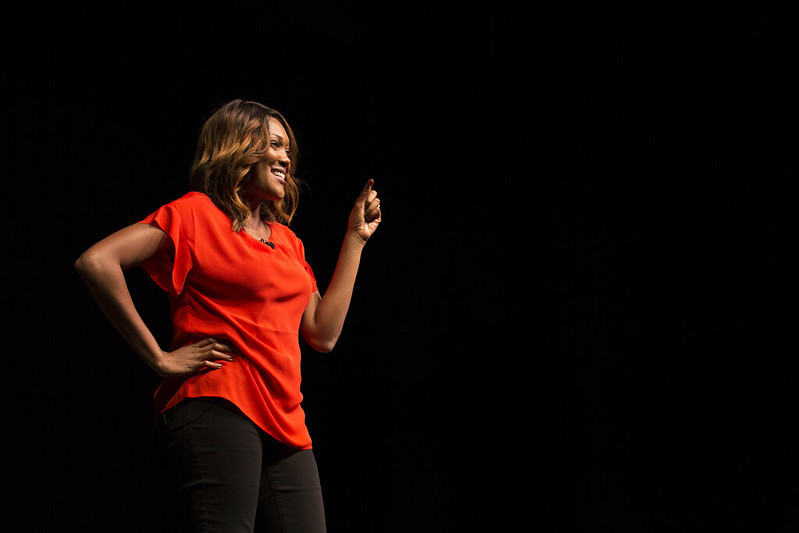 Today, Misty Monroe is unapologetically black. But that wasn't always the case for the actress who struggled to understand her identity while being raised in both South Central Los Angeles and white suburban Northern California.

"I grew up in two different worlds," she shared with Cal State Fullerton students, faculty and staff during the university's Feb. 22 reception for Black History Month. "I was always trying to fit in. With my black friends and family, I tried to act extra stereotypically black. With my white friends, I would act real stereotypically white.

"I didn't know how to be black, white, white-black or black-white. This had me torn."

It was a college campus lecture that introduced Monroe to "The Stages of Nigrescence," a model coined by ethnic identity researcher William E. Cross Jr. that outlines five stages of black identity development: pre-encounter, encounter, immersion/emersion, internalization and internalization-commitment.

"Apparently, being black is a process," she said.

With candor, humor and vulnerability, Monroe narrated her journey to achieving a healthy black identity — from a teenage encounter with police who falsely accused her of being a liar and a thief; to the Rodney King trial verdict that propelled her immersion into black culture; to discovering her voice through the visionary writings of Malcolm X; to becoming part of an inclusive theater arts community in college; and to navigating her family's drug addictions, her own relationships and self-care.

"The final stage of a healthy black identity is commitment: Knowing who you are without crushing the uniqueness of another," she said. "That's the stage that I'm in.

"I'm not going to apologize for being too black, not black enough or whatever black I'm supposed to be. I am going to be exactly who I am."

"I've been to almost every Cal State school," said Monroe, joking, "But I will apply here, Fullerton. I like your campus."

Virjee also encouraged the campus to continue creating the inclusive community it desires, one that is "made up of just and civil discourse, equality and equity for all, and access for all."